The police in Sipi region, has intensified its operations, particularly in Kween district, after it charged 18 suspects to court, including a 50 year old ring leader Irene Cherop; all from Kongilel village, Kaptum sub county in Kween district with aiding and abetting FGM.  The group was arrested, after police foiled their plans to conduct FGM activities in the village.

We have noted that the recent cases of FGM stem from a concept of family honor, where only mothers who had undergone circumcision, where deemed suitable to grace the male circumcision ceremony of their son’s in 2018.  As a result mothers started allowing their daughters to undergo circumcision as a way of protecting their future.

There are also further efforts to trace for victims in three separate villages of Kwoser, where 07 girls where allegedly circumcised; and Binyiny where an additional 07 girls are alleged to have been circumcised.  The exercise has also attracted mothers who are circumcised immediately after giving birth.

The police is absolutely committed to fighting FGM, and do hope that the successful prosecution of the perpetrators including parents, husbands and victims who mutate themselves, will act as deterrents.

We have meanwhile established contacts with influential community members and other stakeholders to challenge the practice; as well as tasked teachers, health and social care professionals to report cases of FGM once established in the course of their duties in schools and hospitals.

Following the deportation of 3 foreigners over matters of national security on the 21st and 22nd of January, 2019, the task team that comprises of police, sister security agencies and immigration officials, continue to investigate and monitor individuals to deems areas threat to the prevailing peace and stability of the country.

And as the investigations, progress, we would like to call upon the media and the public at large, to desist from reporting, publishing and disseminating information on facts that are distorted as this can jeopardise investigations and also harm Uganda’s national security.

We do reiterate our commitment to promoting the prevailing stability and peace of the country and further urge all members of the public that it is everyone’s responsibility to safeguard the security of the country by preventing and reporting any suspicious behaviour that would put the lives of all Ugandans at risk.

The territorial police at Jinja Road Divisional Headquarters has opened an inquiry into an incident where a thief emerged from the side walk and smashed a car window with a stone, seriously injuring the driver of Saloon car registration number UBE622K. The driver who has not yet registered a complaint, had exercised caution and drawn up his car window.

This new development is however a signal to all motorists and in particular women, lone drivers during late night and passengers of the dangers of driving at intersections and traffic jams.

Further efforts are in place to obtain the CCTV footages, to enable us work towards the identity of the suspect.

Efforts to trace for the victim are in place to help obtain a clear picture of the occurrence.  We would like to urge all motorists to be extra careful when approaching traffic jams and intersections by keeping all personal belongings including valuables underneath the car; be wary if people standing around; ensuring all doors and windows are locked while driving and avoid street vendors.

In addition, late night drivers are advised to take extra care by slowing down and timing the green light; and to always leave a gap to help manoeuvre escape. 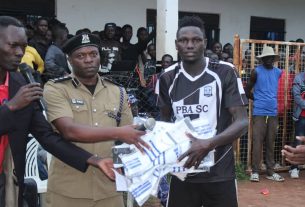