We have today 6.12.2021, entered day 20, since the deadly suicide attacks occurred at CPS and Parliament Avenue.  As a result, our Joint Counter Terror Task Teams continue to disrupt plans by the ADF terror cells, to purposely deter them from carrying out, more deadly attacks in the country.

As you are all aware, on the 30.11.2021, our task teams arrested Isma Kiyemba, a 24-year-old, suspected terrorist and member of the ADF terror cell in Lweeza, where they recovered an assortment of terror related exhibits. Additionally, on the 2.12.2021, our task teams, tracked down and arrested Twaha Ssegujja aka Kisembo Joseph, a 37-year-old, male adult, and resident of Nakuwadde village, Nakabugo Parish in Wakiso district.  We have established that the suspect came to Kampala in 2007, from Kanyamiyaga village, Nyamiti parish, Kagadi district and joined the bodaboda industry.  After 11 years, in 2018, he was recruited into the ADF ranks, and went to the Eastern DRC, for military training.  In furtherance of the ADF plans in Uganda, he sneaked back into the country, with an AK47, and started carrying out tasks assigned to him by Meddie Nkalubo, aka Benjamin, aka Abubaker Saleh aka Isaac, who is suspected to be in South Africa or Zambia.

The terror suspect was disguising as a bodaboda rider and also had a shop at Nakuwadde village, that he was renting from Swaleh Abubaker. A thorough search was conducted at the shop, where he found a hidden store, with an assortment of weapons and bomb making materials. The items recovered included; an AK 47 Riffle, that had no magazine, a silver grenade bomb concealed in a laptop bag, 9 pairs of green gumboots, 5 airtel lines and two Itel phones, 389 detonating roads, 3 suspected explosive boosters, 2 bags of ammonium nitrate, packed in sugar sacks and 7 tins of chemical fluids, among others.

The two sets of recoveries and arrests within the course of last week, have definitely dealt a big blow to the ADF terror cells.  The suspect Twaha Ssegujja, was the main courier of the ADF networks and was actively involved in transporting the bomb making materials and other weapons amongst their operatives. He had newly shifted in the area, where he had spent only 21/2 months from 15.09.2021. 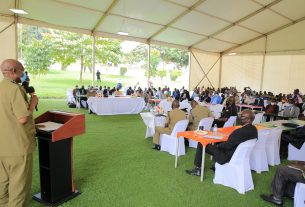 1 thought on “UPDATE ON THE ONGOING COUNTER TERROR OPERATIONS”