The United Nations Resident Coordinator and Representative for the United Nations Development Program  (UNDP) in Uganda Ms. Rosa Malango has this afternoon donated 12 motor vehicles to the Inspector General of Police (IGP) John Martins Okoth Ochola at a ceremony organized at Police headquarters in Naguru to enhance policing in refugee settlements in Uganda.

“It gives me great pleasure today to celebrate the partnership between the Uganda police force and the United Nations in Uganda. What began as a nascent relationship has now become a great partnership,’” said Ms.Malongo.

Shefurther noted that over the last few years, the conflicts in the region have led to forced displacement of people from South Sudan, Burundi, Somalia and the Democratic Republic of Congo (DRC).

She emphasized that the refugees have placed a considerable strain on the security architecture in the regions where they are hosted, hence requiring an injection by Uganda Police Force of not only manpower but also logistics to ensure that peace and security is sustained in the refugees’ settlement areas.

“The ceremony marks an important milestone in our collective effort to secure life and property in a committed and professional manner in partnership with the public, in order to promote development and ensuring that access to justice is increased. It also demonstrates the close relationship that exists between the Uganda police force and the United Nations,” said IGP Okoth Ochola.

The relationship has been forged over many years of working together in protecting the vulnerable population in Uganda and others parts of the world.

He added that the United Nations has been a key ally in ensuring that UPF fulfills its mandate wherever it is required.

“We are happy to be able to support and make contributions to the various international missions under the United Nations and I pledge our continued participation in the peace assignments when called upon,” remarked IGP.

IGP Okoth Ochola said that the vehicles will be used in policing refugee settlements and for community policing activities in the refugee caring districts. 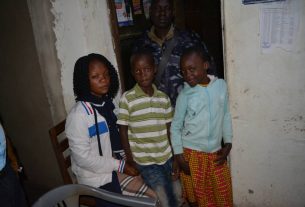 THREE SUSPECTS ARRESTED FOR FORGERY OF DIPLOMATIC NOTES FOR US VISAS, OTHER SUSPECTS ON WANTED LIST