The territorial Police at Rwakashana cell, Nyarubare parish, Ntungamo sub-county Ntungamo District, has today Tuesday 26/072022 arrested a woman and her son for the murder of her husband.

The deceased has been identified as Tiwangye Appolo a resident of the same area.

Upon receiving the report, a team of officers from Homicide with the help of the K9 unit responded and cordoned off the scene.

The team introduced the police sniffer dog jaguar which picked the scent and tracked for a distance of one kilometre on a hill and led the officers to the home of the deceased’s second wife identified as Arinaitwe Agnes.

A search was instituted and the phone belonging to the deceased was recovered with blood stains.

It has been established that the couple had a long-standing domestic wrangle.

Arinaitwe and her son have been arrested to help with investigations. 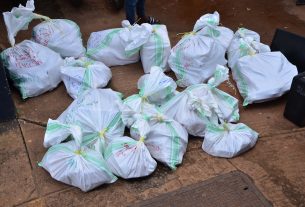