The following traffic guidelines will be in force during the Martyrs Day Celebrations at Namugongo on the 3rd June 2015.

There will be NO PARKING for the general public at the venue.

Only VIPs with bearing stickers will be allowed to access the VIP parks at both shrines (Catholic and Protestant Shrines).

VIPs going to the Catholic Shrine will access Namugongo via Kyaliwajjala and park at Namugongo Primary School Playground.

Private vehicles, Taxis and Motor cycles will NOT be allowed beyond Kireka Trading Centre.

Pilgrims using buses to the Catholic Shrine shall be dropped at Kyaliwajjala then the buses will proceed to park at Namboole via Nalya.  At the end of the function they will be allowed to pick their passengers from Kyaliwajjala.  Those using such means are advised to appoint stewards who should gather their passengers at the end of the function to avoid delays which may result in blocking other road users.

Pilgrims accessing the venue from Northern Bypass from areas of Ntinda, Hoima road, Bwaise will park at St. Peter’s S.S and Hill Side Nursery and Primary School as shall be guided by the Police.

Pilgrims from Eastern Route and other areas leading to Kireka and Bweyogerere will park at Namboole National Stadium (Open ground).

Parking for pilgrims going to the Protestant Shrine will be at the Church Farm. They are advised to access via Bweyogerere and Seeta.

The area between Kyaliwajjala- Catholic Shrine – Protestant Shrine will be a pedestrian zone.

Public service buses will be at all the parking venues to transport those intending to use public means and they will be allowed to drop pilgrims at Kyaliwajjala. Buses accessing Kyaliwajjala from Kireka will connect back to Namboole via Nalya as the road from Kireka to Kyaliwajjala will be ONE WAY.

Parking along the roads is prohibited, vehicles found abandoned by the road sides will be towed to the nearest police station at the owners cost and inconvenience.

Heavy trucks will be allowed along the Jinja – Kampala highway.  Trucks from Jinja side will be diverted at Njeru to Bukoloto (Kayunga) – Kalagi – Gayaza to Kalerwe round about and use the bypass to proceed.  Those from Masaka highway will be diverted at Busega to follow the bypass to Kalerwe roundabout – Gayaza and follow the same route to Jinja.

All road users are advised to adhere to the above guidelines to avoid inconveniences. 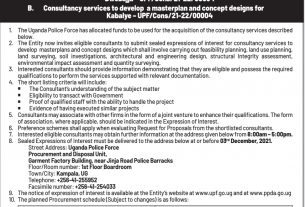 Notice of Expression of Interest for Provision of Consultancy services