The Uganda Police Force is looking forward to recruiting suitably qualified applicants between the ages of 18 to 25 years interested in joining the Force as Probational Police Constables(4500 vacancies) or as Learner Assistant Inspectors of Police(500 vacancies). Applicants must be Ugandan citizens of good conduct, physically fit, good communicators and should be ready to undertake basic training of 12months.  Applicants for the post of Probational Police Constable must possess a UCE certificate with at least 5 credit points including English and Mathematics. Applicants for the posts of Learner AIP must possess diplomas in relevant science fields such as Clinical Medicine and Community Health, Environmental Health Science, Public Health Dentistry, Orthopedic Clinical Medicine, Mechanical Engineering and Automotive Engineering, among others.  The application process has already kicked off and clear handwritten application letters, passport photos and other photocopies of other useful documents should be delivered by the individual applicant to the recruiting team at the respective recruitment as per the schedule.  It is important to note that impersonation and presentation of forged documents will result into arrest and prosecution of the perpetrators.

The Police at Kabalagala Police station are carrying out an investigation into multiple cases of forgery, fraud and altering false documents by Sekiziyivu Paul. The suspect operates a tour agency where it is alleged he works as a visa consultant. A few months ago, one of the Embassies in the country intercepted 8 youth with documents suspected to have been obtained fraudulently from Bugisu Co-operative Union. The youth were taken to the police station at Kabalagala, where an operation to arrest the perpetrator was planned. Some exhibits were also impounded during this operation including desk tops, documents and the statement of the suspect has already been recorded. We call upon any other persons who may have useful information in this case to share it with us in confidence.

Police in Bugiri district last evening (7th July 2019) arrested six people in connection to the murder of Okalo Okisham,a male Juvenile aged 2 and 1/2 years, Samia by tribe who went missing on 3rd July 2019 from the home of his grandmother identified as Ajambo Scovia, aged 32 years resident of Matovu A village, Nankoma sub-county in Bugiri distict. The mother of the victim made a report at the Police Station in Bugiri on 6th July 2019 and a hunt for the child begun till the body was discovered in an abandoned shrine. Those who have been arrested to help in the investigation include Ajambo Scovia, Mugenyi Majidu, Kawanguzi Adam, Mukama Hassan, Mutanda Badru and Igaga Juma. The victim’s body has been taken to the hospiatal for postmortem.

We also have arrested Nabireeba Winston 27 years of age, a barber and resident of Soweto cell, Namuwongo in Makindye Division in connection to the murder of son identified as Akakwasa Rodman aged 1year and ½. The incident occurred on 1st July 2019 at about 1600/c. The   suspect was arrested as he attempted to commit suicide and rushed to Mulago hospital for immediate intervention and is under Police close monitoring. A knife was recovered from the scene and exhibited while the body of the victim was taken to hospital for Postmortem.

The Police at Jinja Road Police station are keenly following clues into the murder of Brother Norbert Emmanuel  Mugalula on  3rd July 2019 information that has so far reached the police station points to a pre-meditated crime. There is an allegation that after the murder, the suspect identified as Asiimwe Robert proceeded to the parking lot where the victim had left his car in Lubaga and tried to convince the caretaker to let him take the car. However, the caretaker declined insisting that the car would be taken by the very person who had parked it there. However, the suspect convinced him to talk to the owner on phone, but the voice in the phone turned out to be of a different person other than that of Brother Mugalula. Sensing danger, the caretaker informed her supervisor and they chased after the suspect. Credit goes to this caretaker for being vigilant. As investigations into this case continue, statements of witnesses are ongoing, including a possibility that the suspect could have had some accomplices.

Therefore, we call upon the public to remain vigilant and share with us any helpful information in confidence. We also continue to call for vigilance especially as the AFCON tournament continues. The general public and in particular venue owners are reminded of the need to remain security conscious and to report to the police in case of any suspicious persons or items. Useful Police contacts are accessible on the MOBB APP.

We also commend the efforts made by the Police and residents of Buikwe on the night of 6th June 2019 when they intercepted and arrested 3 suspects on their way to carry out a suspected arson attack on a family in Bugembe village, Lubongo parish, Ngogwe sub-county in Buikwe district over a land conflict. The suspects were travelling on a bajaj red motorcycle, registration number UEW 306G, which the police found hidden in a nearby bush. The suspects were also found armed with 2 brand new pangas, chloroform and 4 litres of petrol. Those arrested include; Waiswa Arafat, Tumuheirwe Abdunuru Salim (Mugabi Amon, Tumusiime Nicholas(Katende Andrew).  Another suspect, Emaka Andrew was later arrested. Anyone with useful information relating to this case is invited to share it with the Police in Buikwe District.

Police officers travelling on a 999 patrol car disrupted a suspected robbery at Kiri New Site Construction at Wathuba in Bwaise. The officers also impounded a motor vehicle reg. number UAV 376B Dyna, white in colour loaded with cement which was being used in the robbery. The occupants of the Dyna car fled the scene while the security guards at the suite could not be found for interrogation. Police is investigating this matter.

Security Arrangements for Swearing –In Ceremony 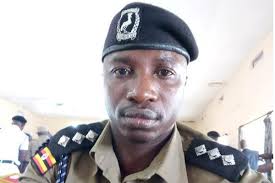 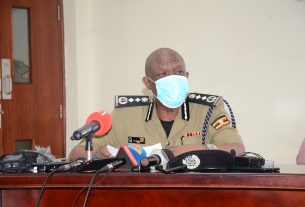