We all recall the numerous activities we successfully policed last week including the coronation ceremony of His Highness, the Kabaka of Buganda at Bulange on Friday July 31st, 2018. The function was attended by hundreds of thousands of people and went smoothly, thanks to the Uganda Police, the organizers for good cooperation, the media for publicity and the citizens for compliance to the laid down guidelines. We did not record any serious cases, except theft of one mobile phone we shall labor to find.

The country is calm and crime is largely curtailed. It is a harvesting season in many areas in the country and there are thefts recorded of foodstuffs, money and livestock. Theft of livestock is being handled by the territorial police supported by ASTU and specialized units, plus members of the vigilant citizens. a case in point is in Kiruhura district where an LC 1 Chairman is suspected to have got involved in the crime and is currently in police custody to help with investigations. Nine heads of cattle and 65 goats were reported stolen but recovered. The police and local leaders are screening them to establish the rightful owners as they were stolen from different kraals. We ask for citizen alertness to detect and deter these crimes. We applaud those that are doing this already.

We all recall that on Dec 2nd, 2017, at Police Headquarters Naguru, there was a ground breaking ceremony for the construction of the Regional Forensic Referral Center of Excellence. It was explained that an ultra modern facility that would be equipped with modern forensic technologies to enhance the police capabilities to fight crime was to be constructed.

It is important to brief the country on how far we are moving in this direction. All the necessary preparations have been done, legally binding documents signed by the relevant authorities and the project awaits approval by parliament for it to take off.

It is a huge project that involved support from government and the exchange for a 60 acre piece of land to the investor.   The contracted investor for the project is TIP TOP Investment Ltd. And the budget for the entire project exceeds US Dollar 60 millions.

The Uganda Police Force has kicked stared yet another huge project, a brain child of the HE, the president of the Republic of Uganda, YK. Museveni dubbed the National CCTV project.

In October 2018, construction of the National Command Center is expected to kick off at Naguru, Police Headquarters. It will be an ultra modern facility that will house all security agencies with the Uganda Police being in lead.

In Kikandwa, located in Kakiri Division, Wakiso District where we have a strategic piece of land, we shall build an ICT research center. We look forward to build a robust team of ICT experts in the near future. With these initiatives, crime record management systems will greatly improve.

This is a national project spear headed by the Uganda Police Force meant to greatly improve security by enhancing police capabilities to further fight crime. The program to build this robust CCTV project started on 16th, July 2018 and it is anticipated to cover the entire Kampala Metropolitan Area, Major town and cities, municipalities and High Ways.

On July 16th, we started with laying of the fiber in Kampala Metropolitan and so far we have covered 20 kilometers out of the planned 1300 Kilometers. We shall have in total 5552 cameras countrywide, with Kampala Metropolitan taking the lion’s share of 3233 cameras on 1248 camera sites.

In other towns and cities, municipalities and high ways, we shall make excellent use of the existing National Back Borne Infrastructure done by the National Information Technology Authority NITA (U). Use of wireless technologies in many of our municipalities is another option we shall exploit to the best and we can ably promise better services.

Our partners include among others: UCC, NIRA, NITA (U), UNRA, UMEME, NWSC, Ministry of Works, Municipal authorizes, Local Council authorizes and the citizens who are critical in all these undertakings.

The expected benefits are numerous:

We therefore call upon all our partners especially the citizens to own it and support the cause. They should avoid vandalizing these great assets as it has happened with other national assets. We trust that citizens will fully give us their backing and protect these assets.

The police in Greater Masaka have made further strides in the investigations, arrests and recoveries of assets in the matter mentioned above.

On Friday July 31st, 2018 last week, another suspect, Kizza was arrested from Nyendo in Masaka and 10 million shillings recovered from a suspected accomplice in Kyotera, Rakai District. We now have 50 million shilling recovered out of over 300 million robbed.

Those still at large include the prime suspect: Wakube James alias IMRAN, who hails from Nakifuma, Buikwe District. The second one is Derrick Jjumba, who hails from Mutukula in Rakai district is a repeat offender, having been recently release from Masaka prison on armed robbery and murder cases.

A motor vehicle and motor cycle used to commit these crimes have also been seized. These are Motor vehicle Reg. No. UAM 730 U, Ipsum Navy blue and Motorcycle Reg No. UEE 345U. We are hotly pursuing them. They can only delay the process but will be caught and arraigned in courts of law.

We appeal to the members of the public out there who might know their whereabouts to notify the police in confidence so that we find them and arraign them in courts of law.

The Uganda Police Force took a decision to close down this police station given the fact that the land unto which is not ours and the registered owners want to develop it. We have agreed with the owners and have dully communicated to the community about this development.

However, the community of Muyenga and the country in general ought to know that we are not about to close the two other stations namely, Bukasa and Kisugu.

The rumors circulating should be treated with the contempt they deserve.

The process of relocating the police officers and all our assets will soon start. We shall strengthen the other stations and we guarantee the  security and safety of residents in Muyenga and the surrounding environs.

Largely, we look forward to a safer week, where we continue to partner with the citizens in serving them. 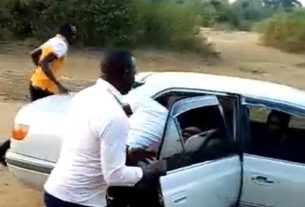