The Territorial Police in KMP is actively investigating circumstances under which a police officer, attached to Kajjansi Police Station was allegedly arrested for an illegal traffic stop, with intention to extort money from a fish dealer.  The officer, ASP Amutuhaire Bright, together with an accomplice, Musinguzi Richard, while driving motor vehicle, Toyota Mark II, registration number, UAW 714B, intercepted Kisuka Tom, in his car reg. no. UBD 328J, at Abaita Ababiri, along Entebbe road, on 7th July, 2019 at around 10.00pm, with an intention of extorting money from him.

We want to commend the LDU Commander, Entebbe and the police response teams, which arrested the suspects while at the scene, for their swift response.

It is however, not true that there was a gun fire exchange during the arrest of the suspects, because they were unarmed.  Although, there was no violence, it is believed the officer used his uniform and authority to intimidate the victim, with the intention of extorting money from him. The officer is being charged with discreditable conduct and together with the civilian for demanding by menaces.

The task team is looking into allegations of previous misconduct and illegal transactions against the officer, and if proved, he will definitely be held accountable for his actions.  In this vey instance, it is alleged they took advantage of the loopholes in the victims dealings in the fish business.  We urge any other members who could have been victimized by the officer to register their complaints with the Regional CID officer, Kampala Metropolitan South, Headquarters at Katwe.

We want to thank all stakeholders and in particular the media and members of the public for taking keen interest, on how officers use their authority.  Exposing such officers is critical to ridding the force of bad officers.

The public should however, know that the majority of our officers are doing a great job of keeping communities safe, upholding the law as well as resisting the temptation of abusing their positions.  We commend them for their good work

We do further want to reassure them, that management is doing its very best, to ensure all ranks are cleared of all forms of corrupt practices and that all officers involved in any illegal activity, are brought to justice. 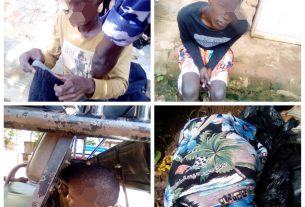