Home > Press Release > Police Not Investigating the Crime Intelligence Deputy Director
There is a story on an online website SPY REPORTS titled, “Police crime Intelligence Director Probed for armed robberies, Driver arrested.”
We would like to refute contents of the story.
Kampala Metropolitan is not investigating the Crime Intelligence Deputy Director as alleged in the story.
On 30th/09/2018 the DPC Mukono received a phone call from Brian Kasule, a care taker of a home located in Nabuti, Mukono District at around 6:30pm.
It has been established that the home belongs to Julius Kawooya who resides in Sweden.
According to Brian, four people had got into the house and were picking household items they could get there hands on.
The area DPC responded and arrested four people.
They were identified as Zarwango Lindah, Nakimbugwe Kevina, Mumbejja Brenda and Tumusiime Charles, who was the driver of the vehicle that was carrying the household items that were allegedly picked from the said house.
On interviewing the suspects, we were able to establish that Linda was once a member of that same house. It’s alleged they were in a relationship with Kawooya Julius and according to Linda, she had come to pick her personal items with the aid of the three colleagues mentioned above. We have also established that Lindah approached Tumusiime whom we have established to be the brother to help with the transportation of the items since he had a car .
However, we are looking into the above allegations as she said .
General inquiries are on going and we call upon the website to put the record straight , there were no guns recovered at the scene as alleged by Spy reports.
There was no wholesale  shop broken in at Mukono as they also allege in the story.
PRO KMP
LUKE OWOYESIGYIRE 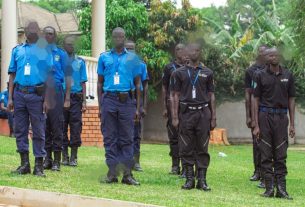