The Inspector General of Police with deep sorrow regrets to announce the untimely death of Commissioner of Police Godfrey Taire Idhewge, who passed on Friday afternoon at St. Francis Hospital in Nsambya.
We do extend our heartfelt sympathies to the immediate family members, and the entire police fraternity.

The late CP Godfrey Taire Idhewge joined the police, on the 2nd January, 1989, and due to his unselfish dedication, courage and commitment, he grew in career through the ranks from Cadet Assistant Superintendent of Police to the rank of Commissioner of Police.

The fallen officer served with distinction in a variety of high profile positions that included Commandant of Environment Police from 2014 to 2019, Commandant Railway Police in 2011, Police Force Transport officer from 2007 to 2011, Kampala Extra Region as the deputy regional police commander from 2006 to 2007, Deputy Regional Police Commander for South Western region in 2006, District Police Commander Lira District 2004 to 2006, Kumi District Commander 1991 to 1995.

He also served as a Member of Parliament for Kagoma Constituency, from 1996 to 2001, and was reinstated to the Uganda Police Force on the 23rd October, 2001, after five years as an MP.
The IGP has tasked the Directorate of Welfare to organize the burial arrangements in honor of our fallen comrade.

Once again, our heartfelt condolences go out to our comrade’s family, whom we hold in our prayers and thoughts.
May the soul of Commissioner of Police, Godfrey Idhwege rest in eternal peace.
Further burial arrangements will be communicated later.
CP Fred Enanga 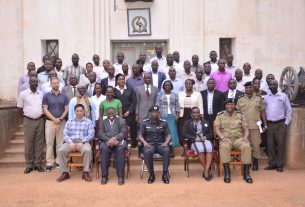 80 Officers Trained in Fraudulent Document Identification and Detection of Impostors