The Territorial Police in KMP North is actively investigating a double attack on two petrol stations in Gayaza and Sekanyonyi respectively. The first incident occurred on the 17/03/2021, at Prime Petro Station, Gayaza, at around 1am, after jerrycan of suspected petrol was hurled into the station, followed by a petro bomb which ignited a fire, that burnt one of the fuel pumps at the station. The fire was successfully extinguished, although it caused damage to the fuel pump. We are also looking at the appearance of the conductor to a coaster mini-bus, who came to the petrol station claiming he had forgotten his medicine in the mini-bus. It is moments after he had left that the attack occurred fortunately no casualties were registered.

The second incident occurred at Lorris Petrol Station, at around 1:30am, after a group of 3 men approached the fuel pump, with a 10 litre jerrycan, under the guise of fetching fuel. They hurriedly poured petrol near the fuel pump and attempted to set the petrol station on fire. The guards on duty responded and fired at them, as they escaped from the scene, but missed them. The 10 litre jerrycan with traces of suspected petrol was recovered, an old sack and a match box. There were no damages and or casualties.

The task teams are gathering more information about the double incident which appears to have been attacks targeting petrol stations. The fact that the methods used are similar, makes us consider these attacks as some form of organised crimes, with a potential of domestic extremism, aimed at undermining the prevailing stability, peace and security in the country.

We do reject all forms of violence aimed at destabilising our country. And we wish to reiterate our stance of countering all forms of threats to the security of Ugandans.

We also urge all proprietors of fuel stations, to promote target hardening controls at all these stations. 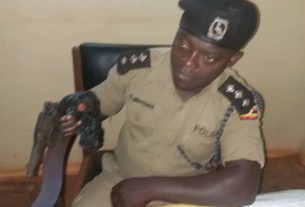 The IGP has appointed and made transfers in ICT Directorate