The police day has been preceded by the police week packed with demonstrations and exhibitions country-wide.

While presiding over the celebrations, His Excellency Y.Kaguta Museveni congratulated the Uganda police force for improving the capacity to stop trouble makers using soft methods.

“So, what you saw here (demonstrations) was a comprehensive capacity of the state to handle trouble makers non-lethally without anybody dying,” said the president.

The president said that the concept of community policing makes police work easier adding that it is not just the work of policemen but all members of the community.

In order to consolidate police capacity, the president devised ways of ensuring that those who commit crime are easily discovered.

He said that one way is to complete the electronic registration of all Ugandans saying that in the recently concluded general elections, government registered and computerized finger prints for 17,000,000 (seventeen million) people.

The president added that government is going to register everybody including new born babies.

“That will make the detection of the criminals easy, because everybody’s identity will be computerized,” emphasized the president.

By the same token, the president said that government is going to put cameras in all major towns.

“All trouble makers who litter our towns, thieves, and over speeding motorists, the time is now. You will never do them again. The camera will be watching you,” warned the president.

The Inspector General of Police Gen. Kale Kayihura thanked the president for honoring and presiding over the historic event, the first of its kind in 100 plus years of the Uganda Police Force.

General Kale highlighted that community policing is the richest approach in creating a crime-free society.

He said that unlike traditional policing, community policing addresses the root-causes of crime noting that crime is a symptom of problems in society.

He added that some of the problems we are having are crises in the family adding that all over the country, domestic violence has proved to be a big problem.

General Kale said that although drugs are themselves a problem, they are also a source of other problems like contract killing adding that drivers and riders who cause accidents do so under the influence of alcohol.

On the 27th September 2016, the police launched the police week where the Hon. Minister of state for Internal Affairs Hon. Kania Obiga launched the construction of 1020 (one thousand twenty housing units) at Naguru that will house lower ranking officers. On the same day, the Hon. Minister of Internal Affairs Hon. Jeje Odongo launched the neighborhood watch at a function that was organized at Kitebi community policing station in Lubaga division.

On the 3rd October 2014, the Uganda Police Force celebrated 100 plus years of existence under the theme: From colonial policing to community policing a century of challenges.. It was from then resolved that every 3rd October be celebrated as a police day. 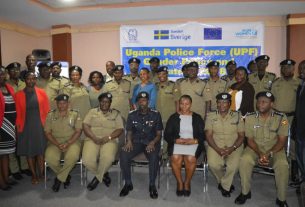 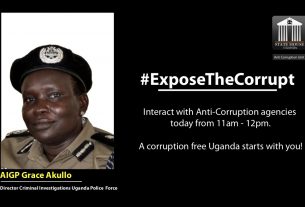