The Territorial Police at Kampala Metropolitan North Headquarters, has opened a Death Enquiry File, to establish circumstances surrounding the disappearance and subsequent death of Michael Kalinda aka Ziggy Wine, which occurred on the    4th /08/2019. An initial complaint of disappearance, had been reported at Ganda Police Post by Mugarura Patrick, his immediate neighbour on the 27th/07/2019, six days, after he was last seen on the 21st/07/2019. He, however did not record a statement to guide investigations.

On the 3rd /08/2019, another complaint was registered at Wandegeya Police Station by Mubiru James, after the victim, was traced in Mulago National Referral Hospital in an unconscious state. There were also no clues availed at this stage.

This morning, a post mortem examination was carried out in the presence of two relatives and the cause of death, indicated as blunt force trauma to the head. The victim had a fracture on the skull, which injured part of the brain; his right hand had cuts on two fingers, classified as defense injuries arising out of a struggle, both eyes were present, although one side was injured. The injuries point to a straight forward case of murder.

The task team is working with the management of the National Referral Hospital, and reviewing the CCTV footage from 3/09/2019. And tracing backwards for any images that could reveal how the victim was brought and abandoned at the hospital. They are also working with the immediate family members to verify claims of “Be Careful”threats on phone, to help track down the alleged suspects behind the phone threats.

We continue to take all allegations of threats to life seriously and our detectives have started putting the pieces together. At this stage, the motivation to the murder is not yet established. Therefore, all political actors, journalists, activists, theorists and members of the public, are cautioned against speculating about the murder and instead advised to avail information on this matter to the police.

It can also be passed in confidence to the police at KMP North on telephone number 0715986954.

We pay tribute to the victim and also convey our condolences to his immediate family, friend and colleagues to the deceased. We will make sure justice is served to the family of the deceased.

Further progress will be availed in due course. 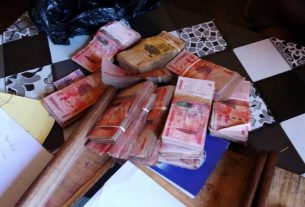