Police and other security agencies carried out a joint operation in Sezibwa region to net thugs who have been stealing car number plates in people’s residences in the area.
In the operation several number plates were recovered and one suspect arrested.

The suspect was identified as Fred Walukaga, a resident of Wakisi in Njeru, Buikwe district.
He was found in possession of several number plates.

According to Sezibwa Region Police Spokeswoman, Hellen Butoto the suspect moved around plucking off number plates, leaving behind his contact.

“He plucks off number plates from vehicles. He leaves his contact on the vehicle then demand for money so as to return the number plates,” Butoto said adding that Walukaga confessed to have been committing the crime.

Walukaga is currently detained at Lugazi Central Police Station while his associates including a one Wabwire is on the run. 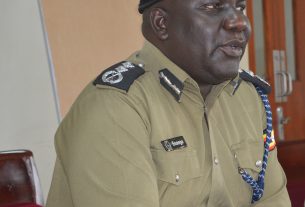