We wish to inform the public that the notorious serial killer of women, identified as Musaasizi Musa alias “Uncle”, aged 23, and resident of Mujomba Zone6, Nakulabye, Rubaga Division, in the Kampala District, is to be charged to court on 5 counts of murder.  In his extra judicial statement he clearly admits how he executed the murders of the 4 women, in addition to the three month old baby girl, who was killed together with the mother.

The brutal crime spree by the suspect began on the 21.02.2021, when he invited his lover Mclin Aheereza, a 23 year old female adult, to his rented room in Nakulabye.  The two had been in a relationship for the last one year.  While at his room, he suspected the victim of having another lover, saved in her phone as “baby boy.”  He strangled her and stuffed the body in a suitcase, and thereafter called a bodaboda rider, identified as Kasaija from Makerere Kivulu, who transported him and the stuffed body up to stone view at Nateete, where they dumped it.  He poured paraffin on the body, lit it with fire and ran back to the waiting bodaboda rider, who transported him back to Nakulabye.

Again on the 13.03.2021, he invited another girl friend of his known as Kansiime Viola, who he befriended while pregnant, after she was rejected by her boy friend.  They went on with their affair until when she produced a baby.  He invited the victim who came with her 3 months old baby girl.  The suspect claims the victim kept communicating to other men on phone, which angered him.  As a result the put on loud music in disguise and strangled her to death.  Immediately after, he also strangled her 3 month old baby girl to death too.  He then stuffed the body of the baby girl in a laptop bag and dumped it at Makerere Kivulu, near Bativa Hotel.  Then at around 2am, he stuffed the body of Kansiime Viola, in a sack and dumped the body near the fence of the Royal tombs in Kasubi (Masiro fence) and lit it up on fire using paraffin.   He immediately after, ran back to his rented room, which was located about 300 metres away from the scene.

The following day on the 14.03.2021, he went to Makerere Kivulu and invited another girl friend known as Noreen Nabirye, to his room.  After a sexual affair, he turned against her and strangled her to death. He also stuffed the body in a sack, and dumped the body at night, near the wall fence of Cobs lodge, located 100 metres away from his room.  He set the body on fire and ran back to his room.

Again on the 15.03.2021, at around 12 noon, he went to Makerere Kivulu and picked another girlfriend known as Mutesi Elizabeth. The two moved together and had a sexual affair in his rented room.  The victim requested for money to plait her hair and upon receiving shs.50.000, she wanted to go back to her work place, which did not amuse the suspect. He also strangled her to death and kept the body in his room. The suspect returned to the victims work place in Makerere Kivulu to avoid any suspicions.  At around 2am, he stuffed the victims body in a sack and dumped it about 50 metres away from his room.  He burnt it using petrol and ran back to his room.

All the victims were picked from Makerere Kivulu.  The suspect admits that it had become a hobby for him to first indulge sexually with his victims, and thereafter, strangle them to death.  And then dispose of their bodies by burning.

We would like to applaud the task team that comprised of officers from the Directorate of Crime Intelligence, CMI, KMP North and Old Kampala Divisional Police Headquarters, who tracked down and arrested the suspect.  They thoroughly interrogated him and took him for an extra judicial statement before the Magistrate, after he confessed to committing the heinous acts.

The suspect also led the task team to his room where beddings, pillow cases, cellotape used in wrapping the victims, were recovered and submitted to the Government Analytical Laboratory for further forensic analysis.  Other exhibits recovered from the pit latrine include; handbags to the victims, a wrist watch that belonged to Mclin Aheereza, ladies shoes, a National ID of Mutesi Elizabeth and knickers.

In addition, CCTV footages clearly indicating how the suspect bought fuel in plastic bottles from Kobil Nakulabye were retrieved.  The paraffin and petrol was used in attempts to burn the bodies of the deceased persons to help destroy evidence.

The suspect was subjected to a psychiatric examination, which concluded that he was normal and of sound mind.  Also arrested is the bodaboda rider, identified as Kasaija, of Makerere Kivulu on allegations of conspiracy and being an accessory to the murders.

We would like to caution women to exhibit more vigilance in their day-to-day lives, since serial killers look for people who are seemingly vulnerable or in high risk settings.  Although nothing can ease the pain felt by the families, relatives and friends to the deceased persons, we pledge to fast track the case to its logical conclusion, which will be a big step in providing justice to the families and the community at Makerere Kivulu. 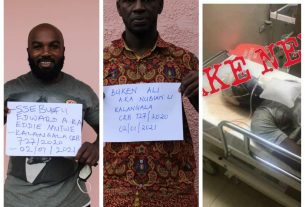