The leadership of the Joint Security Agencies would like to thank all Security Personnel and all stakeholders who in their areas of responsibility, assisted in promoting security and safety at the Uganda Martyrs Day celebrations in Namugongo. We do thank the organisers at the Catholic Shrine, who were from Fort portal Diocese, West Ankole Diocese, the organisers at the Anglican Shrine and the organisers at Mamre Prayer Center, where prayers were led by Archbishop Charles Jones from the USA. We also secured Christian delegations from the DRC, Kenya, Tanzania, Nigeria, Brazil, Zimbabwe, South Sudan and the USA among others.

The interagency planning, preparation, evaluation and coordination efforts were very effective; which made the likelihood of an attack or major threat very low. The command center with CCTV, Aerial surveillance feeds and computer data, gave us the opportunity to monitor in real-time movements of pilgrims at all venues and routes for potential threats.

To all pilgrims, faith-based tourists and well-wishers, we thank you for following our guidelines and safety tips. As a result, only 48 cases were registered from all venues. These included; Theft of mobile phones, (30) theft of bags (05), theft of cash (06), theft in general (04), counterfeit (1), malicious damage (1), stealing motor vehicle (1), which led to the arrest of 48 suspects, who were transferred to Kira Divisional Police Headquarters.

The LCs and the local community were very welcoming and vigilant. We thank them all for a job well done, especially, Sheikh Umaru Yusuf Sekagya who gave us shelter and space for 50 tents at Munawala Mosque at Kyaliwajjala. He constantly checked on the officers to ensure these were doing well. We do thank him for the good spirit.

It was therefore, a great honor for the Joint Security Agencies, to deliver a very peaceful, safe and secure, religious pilgrimage in commemoration of the Uganda Martyrs.

Police recovers gun and other items in Mukono 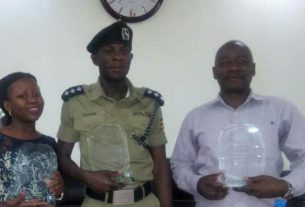