Police in Kalisizzo Township in Kyotera district have arrested a man aged 34 for attempting to grab a gun from a police officer.

Segawa George William, a resident of Matale cell in Kalisizzo Town Council is said to have made at attempt to grab a gun from PC Watira Vincent who was at the time deployed at Rhinaz Pub.

The incident happened about 3:30am in the morning of yesterday when the attacker, armed with two knives.

Appearing very confident, determined and courageous, he was wrestled down but luckily, he slipped away naked, leaving all his belongings in the hands of police men. He was however tracked using the phone he left behind thus his arrest later on Monday.

Those in the know say the attacker has worked in South Africa and Somalia before as a guard, according to documents found in his possession. 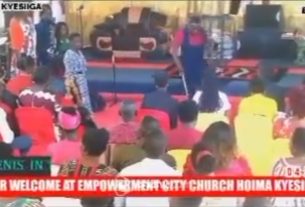