We would like to start by congratulating all Ugandans, and in particular candidates, their campaign agents, fans, well-wishers and other stakeholders, for approaching the last day of the political campaigns for Presidential and Parliamentary positions.  Despite the challenges faced along the campaign trail, we must acknowledge the efforts of every sector including the media, security, all political actors, medical experts, electoral officials and other stakeholders.

Our focus as the Joint Security Agencies is now on the Election Day, where all Ugandans especially voters, will make their choices.  It is therefore, a very crucial stage of democracy, and we shall ensure all eligible voters, safely perform this sacred civic duty.

As we head into the polls, we would also like to remind Ugandans, that we are a peaceful community, although there have been attempts by some sections of the pubic to promote hate speech through several audios and videos to cause ethnic divisions in the country.  Surprisingly, most of these recordings are by Ugandans abroad including mobilized bloggers in Asia, Europe, the US and South Africa.  We urge all Ugandans not to infringe on the rights of fellow Ugandans, during this Election and the days to come.  We have a history of togetherness amidst all threats against our country, and we are confident that even this time, we shall remain Ugandans at peace.

Despite the rights and freedoms to vote, there are a few basic rules that voters need to follow when voting, so that they do not end up breaking the Law.  They should do the following;

o   Make sure you carry along your National ID or NIN

o   When you arrive, ONLY Electoral Commission staff will take you through the voting process.

o    You will receive a ballot paper listing your candidate, party, symbol in your constituency.

o   Read it carefully and then vote for your chosen candidate by ticking or us of a thumb print.

o   When you are ready fold the ballot paper for privacy and insert it in the ballot box.

o   Avoid writing comments on the ballot paper for your candidate, do not sign your ballot paper or imprint names.  It will not count.

o   You are not allowed to photograph the ballot paper you receive at a polling station.  A selfie risks giving away how someone voted which is against the law.

o   Stay sober, drunken people can be disruptive and can spoil their ballot paper.

o   Persons with disabilities, and elderly should seek help from the polling officials.

o   Do not distribute any election related materials.  It clearly shows your political allegiance and if in large groups its an act of intimidation.

o   Employers are warned against refusing their employees time off for voting or even penalizing them after voting.

o   Do not bribe others to vote in a certain way or not to vote at all.

o   Do not threaten or ask someone else to threaten or impose violence on other voters at the polling station.

o   Do not campaign at the polls because all political activities on polling day are prohibited like displaying campaign symbols, verbally advocating for a specific candidate, and having campaign literature.  In addition, wearing political attire to the polls, such as T-shirt, caps is considered campaigning.  Therefore, let us leave all the political swag at home.

o    Regarding health, all voters must know that voting safely during the pandemic requires wearing a mask, hand washing or use of hand sanitizer and on observing social distance.  Precautions are really important because of the high COVID location.

Once again, we would like to reiterate that there are no specific threats targeting the Elections.  However, we are prepared for any eventualities including demonstrations and riots.

As the Joint Task Force, we have an operational plan to ensure the protection and safety of all Ugandans and visitors in the country.  We have heightened our levels of visibility and alertness as we go into the polls.  Additional manpower has been deployed tactically in the field, from the Polling station, the Parish level, Sub-county, County level.  All villages, trading centres, Town/Urban Councils, Municipalities, and Cities are effectively covered in our deployment plans.

Our task teams stationed at specific points will be responsible for responding to any election related calls.  We already have patrols at all levels (foot, motorcycle and motorized) along selected hotspotting poling  centres especially in 39 districts out of the 146 districts in addition to the special checkpoints and traffic enforcements operations among others.

We also have credible intelligence that the NUP Presidential Candidate, Hon. Kyagulanyi Ssentamu Robert wants to go into hiding possibly in one of the Embassies, immediately after casting his vote.  And thereafter, allege through his NUP networks and bloggers, that he has been kidnapped by state operatives.  The intention is to incite the public and cause another wave of protests.  We want to inform the public that this is a tactic that we strongly condemn and issue a strong warning to the perpetrators.

All Ugandans should rest assured and fell safe as we head into the elections.  The elections will be largely peaceful, since we are more than prepared to address any acts of impunity, lawlessness and political violence that may occur on polling date and thereafter. 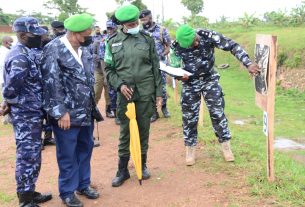