The IGP has extended best wishes to all journalists and media practioners in Uganda, as they commemorate the World Press Freedom Day. He further explained that press freedom was about the right to receive and impart information, before acknowledging the role journalists and media practioners play, in providing information to society. He added that he was happy about the much-improved relations between the police and the media. For instance, this year alone, there has been a tremendous reduction in the use of teargas as a crowd dispersal method and very few incidents of physical attacks, on journalists and disruption of media workers.

This has been attributed to the adequate training, extended to all police officers on the roles and functions of journalists, as well as regular refresher courses on media roles and policing. He further added that acts of interference and obstruction of journalism work, like seizing or damaging cameras, intimidation and other disruptive behavior had reduced, due to the increased levels of awareness and sensitization on media roles.

To uphold this role, the IGP send out a very strong reminder to all territorial commanders, that any attacks against journalists, are unacceptable and must not go unpunished. In addition, all commanders should act quickly where journalists are threatened and initiate prompt, thorough and transparent investigations, and perpetrators brought to book. The office of the Police Press and Public Relations, will continue fast tracking all incidents involving journalists, including citizen journalists and ensure their rights are protected.

We pledge to continue working with media associations like the Editor’s Guild, HRNJ, UJA, Media Council and UCC to dialogue, in order to avoid friction or clashes between the police, other security agencies and members of the media, especially in times of crisis, electoral periods and during public demonstrations.

Therefore, as we celebrate the World Press Freedom Day, the leadership of the Joint Security Agencies, reiterate their commitment to strengthen its relationship with the media. we are going to ensure you are better protected, as you strive to access information. 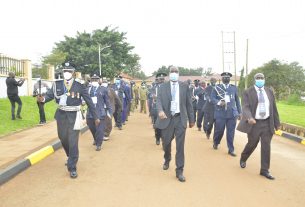