General Kayihura is taking over from Rwandan Police Chief, General Emmanuel K. Gassana who had held the mantle of the organization for the last two years.

EAPCCO is composed of 13 Police Chiefs from the region.

In his acceptance speech, Kayihura, urged the Police Chiefs to discuss issues that affect the region and make resolutions, which resolutions should be put into concrete actions, in order not to render the organization into a talking shop.

He thanked the outgoing chairman for bring Democratic Republic of Congo to join EAPCCO, and pledged to continue with the journey of seeing that Congo is comfortable in its seat at the Organization.

The Rwandan Police Chief in his handover speech outlined the achievements that EAPCCO made during his tenure in office which includes among others organizing the EAPCCO games, Joint Field Training Exercises that was held in Kenya by the East African Police, among others.

In today’s meeting, issues that were discussed are; addressing human trafficking as a security threat: the need for a regional approach, Counter terrorism Node for East Africa, harmonizing legal regimes and prosecution through Regional cooperation to combat organized cross border crimes. 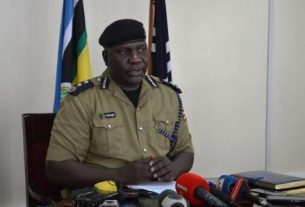