The Territorial Police in Rwizi region, has in custody 8 suspects, who were actively involved in the staging of illegal/fake roadblocks and the subsequent robbery of victims. The arrested gang members include; Mugonza Akim of Biharwe, Muwonge Nuhu of Biafra, Ukasha Kiyonga of Kamakuzi, Kakumu Dominic of Andrews cell and Nsiimire Kennedy of Nyakaizi cell. The operation was expanded on the 21.10.2022, and led to the arrest of 3 additional gang members who included; Mukundane Darious of Sheema, a former convict, Namanya Charles of Nyamityobora cell and Lubega Frank of Mandela cell.

The gang was behind a series of illegal roadblocks and robberies in the region. For instance on the 30.09.2022, while armed with pangas, they staged an illegal road block at HIT bar, along the Mbarara-Burembo road, and robbed Dr. Mugume Dickson of his laptop, router, two power banks, 2 mobile phones and a bag with personal belongings. The victim was from a function and heading towards his home in Nyakaizi cell, at around midnight. On reaching Kakoba, he found a log in the middle of the road that the thugs used to block his way. He tried to manoeuvre his way, but was cornered after several thugs emerged from the bush and robbed him.

The gang was tracked down using advanced intelligence and arrested on the 20.10.2022. Exhibits of material value like two pangas hidden in the ceiling, a pair of black jungle shoes, an Itel phone Simcard 1 motorcycle Bajaj boxer under registration number UEW 139D, a techno smart phone, were recovered.

Most of the suspects arrested are hardened criminals and youth who have turned to armed robberies as a way of survival. We strongly believe the arrests of these hardcore criminals will help restore some peace and sanity in the region. We pledge to continue with these targeted operations, against violent armed gangs and associates, who pose serious threats of safety and security in respective communities. 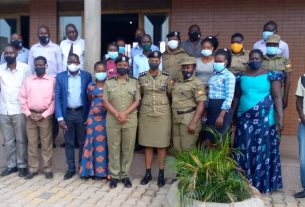 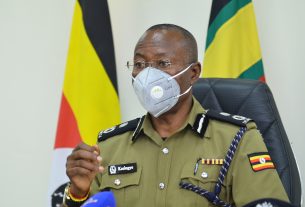