Today, 18th January, 2021, is Day Two of the aftermath of the Presidential and Parliamentary elections, which were conducted in a very peaceful manner.  We would like to start by congratulating the President Elect, H.E.Yoweri Kaguta Tibuhaburwa Museveni and the NRM Party for their triumph in the Presidential Elections, and also thank all the other Presidential Candidates, their campaign agents, fans, well-wishers for their participation. In addition, we do greatly thank the people of Uganda who came out in large numbers to vote. Indeed, they exercised their democratic rights and made their voices heard.

Special thanks are also extended to the Electoral Commission, for successfully conducting the Presidential and Parliamentary Elections, in a free and fair manner, despite the few challenges that they faced. The Joint leadership of the security agencies   greatly thanks the Joint Security Forces for the commendable job of promoting security across all corners of the country.  The very peaceful electoral environment enabled voters to come out in their large numbers and participate in the elections.

Our intelligence components picked information of disruptive plans, dubbed “plan B” by selected candidates and political parties that have not only rejected the outcomes of the elections, but also advocating for violent riots and demonstrations coordinated by their district mobilizers across the country. On the 16th and 17th of January 2021, our task teams countered violent protests by upset rioters in Masaka, Nsangi  and further disrupted all plans by NUP to start riots simultaneously in all major cities and towns in Uganda.

Just like we assured Ugandans and visitors to Uganda, about a very peaceful elections, we would like to assure them of a peaceful aftermath of the elections with very robust plans to respond proportionately against all perpetrators of violent crime, and lawlessness. We have also continued to maintain our visibility and alertness across our boundaries to curtail any infiltration of negative forces linked to domestic terror cells and acts of civil disorder. We would like to warn all persons that had been mobilized from the districts of Kasese, Jinja, Mityana, Luwero and Mbale, to take to the streets in Kampala, the epicenter of the planned riots to reject such calls and instead remain law abiding.

As we conclude, we urge all Ugandans and visitors to the country, to start going about their businesses and daily activities, without fear. During this aftermath, we would like to inform and reassure all Ugandans that Covid-19 is real, and urge all members of the public to be very vigilant and cautious during this period. 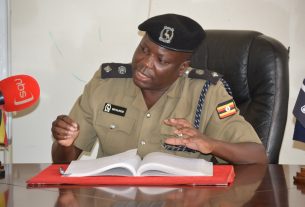 1 thought on “CONTINUOUS ENFORCEMENT OF THE POST-ELECTION PERIOD  ”