The Chinese Ambassador, Mr. Zhao Yali has today handed over a Children Day Care Center to the Inspector General of Police, Gen. Kale Kayihura at Naguru, Kampala.
The China-Uganda Friendship Kindergarten was constructed and donated by the Chinese Embassy to Uganda Police Force. The center will cater for Police Officers’ children who stay and work within Kampala.

Gen. Kayihura while giving a brief background on why the Chinese Ambassador donated the kindergarten to Police, said that some time back after a tour of Ntinda barracks, the Ambassador asked the IGP, whether he can do something for the Police children at the barracks and that is how the Ambassador come in with the idea of constructing a day care center for them.

The IGP asked the Chinese government to extend more support to Police.
“ You have supported African Countries, we want you to continue supporting us, we can do it in form of partnership, that is to say commercial partnership, we want to have partnership with the Chinese, so that we have a win-win situation, not just donations but commercial partnership, Police is a very big business partner,” Gen. Kayihura said.
He vowed to improve the welfare of Police beginning with accommodation.
“By the time I leave Police, I want to see that no Police Officer is sleeping in uniports, I have started demolishing these uniports,” Gen. Kayihura said.
The State Minister in charge of Youth Affairs, Hon. Kibule Ronald thanked the Chinese government for the continued support to Uganda in terms of scholarships and grants.
“We are proud of that and we ask you to increase,” Hon. Kibule said.
Mr. Zhao Yali, said that Ugandan Police Officers have done a lot for this country and they deserve to be treated with respect and honor.
“You (Police) deserve more; you have done a lot for this country. The people of Uganda are enjoying peace and stability because of your efforts, I want to thank you for doing that,” Mr. Zhao said.

Police Officer was shot and killed by thugs 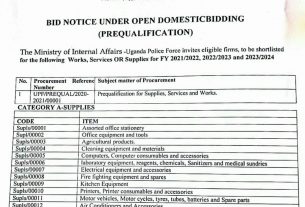