The Police in Jinja has initiated started investigations for the three suspects that attempted to rob KCB Bank, Jinja branch last evening.
The incident occurred between 1930hrs and 2000hrs along Main Street in Jinja town on 24th/07/2019.
The three suspects including two private guards attached to pinnacle Security Company armed with rifles are on the run.
They are; Namutondo Willy and Otikoi Benard. Particulars of one other are on the run.
The suspects is alleged to have put three bankers at gun point demanding for money. However, the bank manager Mbulalina Patrick aged 33yrs who had moved out briefly, returned  and realized that they were under attack. He rushed out and notified police that responded immediately.
The suspects are believed to have fled the scene before police arrived, abandoning one gun an SAR reg. No. Ug Pol 594325 – 07243 with 5 rounds of ammunition’s.

It’s also alleged that a mobile phone was grabbed from the manager as their attackers tried to intercept him from running out of the bank to report the matter to police.
Police in conjunction with the management of pinnacle security are conducting a serious manhunt for the guards, teams have already been dispatched to their home districts, and their homes in Jinja have also been searched where the second gun, a pump action has been recovered from works zone, Nile crescent road.
Details are still scanty on any conspiracies but a broad based investigation is being conducted and a number of bank staff have already made statements at CPS, Jinja.
Two cases of robbery and attempted robbery has been filed at the station. 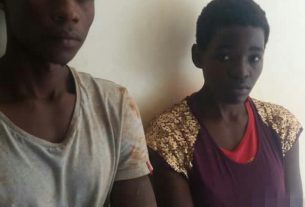