The leadership of the Joint Security Agencies, has tasked all territorial commanders, to be prepared to respond to any form of violence targeting them. Whilst, its true that security and law enforcement officers, are trained on how to protect the public, they are also trained on how to use tactics and proportionate use of force, under violent and unpredictable attacks, like ambushes, attacks at checkpoints, detaches and security facilities. There should be no tolerance for shootings, robbery of guns and attacks on security personnel, who are fundamental to public safety and security.

All security personnel must know that the leadership of the Joint Security Agencies, stands with them and are doing everything possible to prevent such unprovoked attacks and ambushes. As we honor our fallen comrades who died in the line of duty at Luweero checkpoint, Busiika police station, Gadafi mini-checkpoint, Nkaatu zone in Iganga district and Kyondo zone – Kapeeka in Nakaseke district, we want to assure their families, that they are our heroes and we were inspired by their selfless acts of bravery. So far, 3 armed assailants linked to the deadly attacks, have been put out of action in Iganga and Kapeeka respectively. Additionally, 3 guns and 88 ammunitions have been recovered.

Right now, we are using all available lawful investigative techniques to combat the attacks and ambushes, and are also continuing to build on the intelligence gathered; especially on the attackers in Luweero, Kapeeka, Busiika and those behind the foiled attacks in Kensington, and Nakulabye police posts, who seem to have committed the violent attacks and attempted attacks, in furtherance of a social or political goal. Regardless of their ideologies, the Joint Security Agencies, will aggressively pursue, those who seek to engage in violent criminal activity or threaten to use force, violence or concern in violence and the law in furtherance of their social or political goals.

We also want to warn all media practitioners who are promoting panic in the public with their persuasive anti-police rhetoric. They should clearly distinguish violent attacks, foiled attacks and guns stolen out of negligence. For instance, the loss of guns in Bungokho, Mbale, Sanga, Kireka, and Bugoma Central Reserve were not as a result of attacks, as claimed, but as a result of neglect of duty. Now is the time for the media to stand-up and do their journalistic work, in a very balanced and evidence-based manner, instead of promoting unnecessary fear in the public.

The lost guns from Kireka and Bugoma Central Reserve were recovered. Out task teams also recovered the Riffle that was robbed from Bukomero Town Council. The thugs shot dead Tumwine Badru, a Private Security, who was guarding Premier SACCO and his riffle robbed. The gun was recovered in the cabin of a fuel tanker registration number KCB 022G in Nakaloke Trading Centre. In addition, the Joint Security Task Teams also recovered the riffle that was stolen from a guard of KAMED Security Ltd, while guarding FORTIBET Bunga. It was recovered with Amai Peter in Oyam district, who was also arrested. Two other accomplices who harbored him in Kanyogoga – Gulu city were also arrested. They include Ojara Abdallah and Abalo Irene.

Otherwise, the majority of security personnel are continuing to do their great work or protecting the communities. Even in the face of danger, we continue to see very brave, dedicated, compassionate and courageous, security personnel keep out communities safe. They leave their homes everyday and put their lives on the line to protect the public and keep them safe. They all deserve our respect and support.

Party Official Charged With Forgery Of Names On Petition Papers 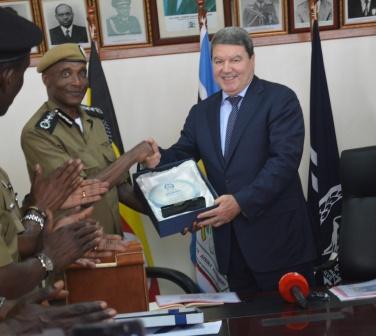