A fatal accident has been recorded at Savanna Police Region. Three out of four people involved have been confirmed dead.

The details of the deceased occupants of motor vehicle Isuzu UBE 048B will be availed after we have contacted their families.The fourth occupant who survived with serious injuries has been identified as Kigundu Yahaya.

The incident involving another vehicle, a Scania trailer UAT 139Q/UAS 615A happened in Migera, Nakasongola this afternoon.

The same area a yet to be identified Motor vehicle at 0200hrs knocked and killed unidentified person and took off.

A hit and run case had been opened in migyera and we are on the look out for that particular vehicle and it’s driver.

One Arrested Over Attempted Murder 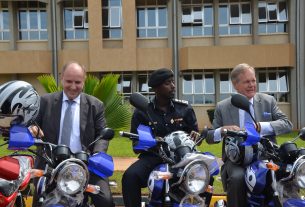