The IGP. Gen Kale Kayihura is not impressed with the words and or statement attributed to him by the media recently during the double event of passing out crime preventers and the sports gala in Kapchorwa.

In the Daily Monitor Newspaper of Monday 25th January 2016, a story was published under the mini headline ‘Go hang-Kayihura tells of critics on crime preventers’’. And in the Observer Newspaper, a dangerous story was run under the headline ‘Elections; Rugunda, Kayihura disagree on power transfer, where it went on to add’’ we shall not hand over power to the opposition to destabilize the peace we fought for’’. The same story was picked by NBS television.

We want to inform the public and the media fraternity that the IGP did not use the words by the journalists to meet his communication needs.

The journalists intended to provoke publicity and generate controversy by portraying the IGP in bad faith as an officer who does not uphold and observe rule of law.

We appeal to all, not to believe the story, and call upon the journalists and media managers to correct it by providing the public with information that is truthful.

The Woman MP Kapchorwa, the Aspiring MP, the RDC, I am overwhelmed by your presence on this day, when we are beginning the sports gala organized by the UPF. It is a two day event where we are honoring and celebrating the people of Sebei as well as other parts of Uganda, which have produced athletes that have won gold medals and other medals and brought honor to the country. It would have been done a bit earlier, but we have done it now, especially we police, because you have given us your children and they are winning gold medals, in both international and regional championships, and as well, brought honor to the police, as well as to the country.

We would have it in Kampala, but we said we had to do it with the families of the athletes and the community. And so that is the reason we are here.

Today is the beginning; we saw it appropriate to combine it with the pass out of crime preventers who are passing out in this region. I would like to thank them for having turned up and responded to our call in such big numbers, 65000 is not a small number. RDCs of Kapchorwa, Kween, and Bukwo, I don’t know how many police officers you have there in uniform and if we are to deploy them, I don’t think we can confidently say we can fight crime. But with the resource of 65000 crime preventers and you have seen what they have shown to you in two months, because this means a lot, it means fitness, it shows a team which is organized, so this is our force and in case you are attacked from across, but I don’t think it can happen, now we have got a force to deal with them. All we need to do is to change the sticks and give them rifles and by the way I would like to tell you this, you are a reserve of the army, in case of war, you will be called upon because the police are the reserve of the army, according to the law.

According to the Police Act, the Minister of Internal Affairs, at any time, can call the police to serve as a military force, so by extension the crime preventers in case of any a war, can be called upon. And that’s why they should be trained in skills at arm and self defense, so that you have a force here. And by the way, this is a continuation where it started in our neighborhood zone, in the fight against state inspired terrorism of Idi Amin, through the struggles of Mr. Sabila and FRONASA who fought against Idi Amin and won. So what people are trying to vulgarize and confuse, started long time ago in 1977, in the fight against Idi Amin, when they empowered people to fight against crime in government.

And at that time Idi Amin was killing people, Maliyamungu, and so they mobilized the people, and fought with the support of Tanzania. Then later, after the Idi Amin dictatorship, they fought terrorism in the government after 1981, where some patriots went to the bush. This was by mobilizing people to fight the government, which had the support of the most powerful countries in the world and removed it after five years.

We are celebrating 30 years next week and the victory of the people’s war. So when I went to the police and found the idea of this community policing, neighborhood watch, I said I will organize the ordinary people to fight crime and criminals and if you see in all communities, in all districts, the criminals are few, but they are organized, where as the law abiding citizens are many but are not organized. So the whole idea is organizing at the neighborhood level and empowering them with self defense and other skills as the surest way of eliminating crime.

For instance every year when we issue Annual Crime Report, the biggest crime is defilement and domestic violence, and the victims are women and girls. So the answer to that is the taekwondo you see here, and we want this program to develop in schools like this Sebei College, especially, to empower the girls because we cannot have enough police to police everybody.

Even the UN ratio says 1 police to 500 people, so you can never have enough police to ensure security. So it is only through people participation that you can effectively deal with the crime. So for this program, those who criticize it don’t understand what they are talking about and I want to pay tribute to those who have volunteered.

It is a volunteers program and that is what it is all about and I think our political leaders try to confuse it. And they have even misinformed our friends, the Europeans and Americans that even when they come here; they come asking for crime preventers. They think crime preventers are a group who cause mayhem at the rallies.

If you go to America you find crime preventers yet they have a bigger police force and resources than us the 3rd world countries. Am very grateful to H.E the President, the Prime Minister and the Cabinet and even Parliament, who have come up very clearly to say no, this is a legitimate program, it is constitutional , lawful , it is empowering , its improving strength of the country .

These people who are talking, some of them are ignorant, and I am suspicious they want our country to remain disorganized and weak, so that they can swallow us, especially when they have heard there is oil. You know when they talk about the oil curse, what they mean. So the government is very clear on this matter and nobody should even waste our time because this is a democratic policing. We are empowering ourselves, the community, to fight criminals in the neighborhood. I don’t know even whom they vote and it’s not my business. Mine is special that the country is secure 24/7.

So I will go deep in this, but most important is, this is a program of the police nobody should confuse. We have a department of community policing headed by a Commissioner who reports to Chief Political Commissioner of Police. She is called CP Namutebi, so it is not a group just there, which we disown and they have got an organization right from national level, district, county and sub county, up to the village. And we are trying to link it to the LC system and “mayumbakumi”. We want to revise the “mayumbakumi”.

So I don’t knowhow many villages are in Sebei region? So it is times 30 which will be a big force, I have tasked the Director Ochom of Research and Planning, to in the 5 year strategic plan, come out clearly on this matter of the recruitment and training of crime preventers, and we see how we expect to be by 2021. And I hope by that time we shall have 300 crime preventers per village in Sebei region, meaning each village will have two companies to defend it against criminals and vanish these people, the so called “kanyama”, who beat people and steal goats, chicken, cows and sheep which we survive on.

We want Uganda to create a crime free society on this idea and nobody will stop us as long as we have the responsibility of keeping this country safe and secure.

Crime preventers you are doing things out of charity, I want to thank you because you are volunteering, you are more enlightened, that may be the others don’t know, that it is in your interest to keep your neighborhood watch and your community safe and secure.

So I don’t need to pay you to keep your home. In the bush, I was not given a salary and I want to pay tribute to you because you have joined us to work out of conviction that whatever you do in the community is real serving and is also in your interest.

The President would wish to come to pass you like he has done it in other parts like the Elgon region but is very busy on other programs and even tomorrow, he would want to come but has delegated the Prime Minster of Uganda, because he appreciates the importance of this cause.

I just want to pay tribute to you for joining the effort, but it is not for nothing. We can’t give you salary because you are in millions; right now we have got 11 million throughout the country. The police are only 43000 and crime preventers are 11 million, but they have made a big difference in the whole country. We can’t pay you salary but you are going to get projects, this is real, so that as you serve, you have projects, which can bring income to you at the same time, you are liberating the country.

As police we shall share the little we have, you have got a very good SACCO and if this SACCO works, it will be a vehicle through which you can get more support.

We are trying to get you identification and this will be equivalent to a police warrant card, I can’t promise when, but it is in the making, as well as uniforms, torches, gumboots and watches. As I said, this is just the beginning of the sports gala, we will say more about sports tomorrow, but today was dedicated to passing out the 65000 crime preventers in the Sipi region.

Tomorrow it is going to be the main day where we shall begin at 6 O’clock, with a 10 km run and I will participate in the 10km race. And I invite all of you to participate; including all crime preventers although I am passing them out today. If you fail to participate, I may have to reconsider because this should be your routine. We are determined to change and swipe all the gold medals the other side of the border in Kenya and bring them to this side of the boarder.

Thanks to your children.

One Arrested Over Attempted Murder 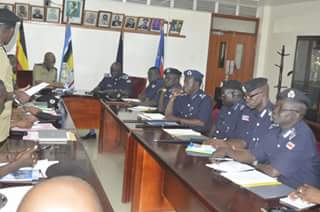