In a few hours, the country and the rest of the world will welcome the New Year, 2016, at the same time seeing off the end the year 2015.  As we take stock of our experiences during 2015, I take the opportunity, on behalf of the Uganda Police Force, as well as the joint security team (composed of Uganda Police and sister security agencies), to assure the public that, in spite of isolated incidents of criminal violence, and accidents here and there, Uganda is safe and secure, enjoying unprecedented peace and security as, presently, there is no part of the country under any form of armed conflict.  Early in the New Year, we shall publish the 2015 Annual Crime and Traffic Report, which, I believe will show a positive trend even in the fight against criminality, and accidents on roads, public places, and in our neighborhoods.

The Uganda Police has the responsibility to provide security and safety to the electoral process in support of the Electoral Commission.  In that regard, let me use this opportunity to assure the country that, in spite of isolated incidents of violence, and other violations of electoral laws in some parts of the country, overall, the programme of the 2016 National Elections is progressing peacefully.  Yes, there were incidents of violence, especially during the NRM primaries, and all complaints/allegations are being investigated, and, where there is evidence, culprits have been taken to courts of law.  What is gratifying, however, is that, since nomination of candidates, in early November, 2015, over 600 campaign rallies have been held without any incident of violence, thanks to the compliance of most actors, i.e. candidates, their agents and supporters, as well as the effective presence and vigilance of security forces, crime preventers, and the support of the population generally.

Having said that, however, let me give highlights to incidents of criminality that have taken place and reported in the media, and which, understandably, are cause of concern among members of the public, and what action Police has taken.

Ntungamo Incident:  I will begin with the incidents in Ntungamo district on the 13th December 2015, when Hon Mbabazi was campaigning in the district.  We have made substantial progress in the investigation of those incidents to establish what happened, what caused it to happen, and who is criminally responsible for the orgy of beatings that the country and the world saw on television sets.  Some suspects have been apprehended, charged in court, and remanded in prison.  But others (in fact key suspects) are still on the run.  In particular, one Christopher Aine, (who is the ring leader of the so-called “security detail” of Hon Mbabazi), is not yet apprehended, as he is still on the run or in hiding.  You will recall that he was charged in court, sometime back, for similar criminality in Jinja, when          Hon Mbabazi was conducting consultation meetings there, and Christopher Aine assaulted Police officers.  At the time of the Ntungamo incidents, he was on court bail.  As a result of those incidents, on application by the CID, court cancelled his bail, and a court summons was issued for him to appear in court before                6th January 2016.  If he does not, a warrant for his arrest will be issued.  Police has issued notice to the public appealing for any information as to his whereabouts so that we apprehend him to answer charges relating to the incidents of beatings in Ntungamo district.  We have put a reward of Shs 20 million for anyone who can help Police with information leading to his arrest and prosecution.

Lamwo Incident.  On 25th Dec 2015, at Lalogi Sub-county, Lamwo District where FDC Presidential candidate Dr. Kiiza Besigye was scheduled to hold a rally. While proceeding to the venue, a group of FDC supporters led by Hon. Betty Aol the Gulu District woman MP, found Hon. Jacob Oulanyah who had called off his public rally interacting with local residents at Aketket Trading centre. Hon. Betty got out of her motor vehicle and tried to engage Hon. Oulanyah and his supporters as to whether he was having a parallel rally in the area. During the scuffle, it is alleged Hon. Jacob Oulanyah’s supporters stoned the convoy of Hon Betty Aol, injuring  the Gulu District Speaker who was escorting Hon. Betty Aol.

Hon. Betty registered a complaint of assault at Lalogi Police Post allegedly by Achire David, the LC I chairman of the area. The woman MP and her supporters proceeded to Kaunda grounds where they held a rally that ended peacefully.

Alebtong Incident.  On 30th Dec 2015, at about 1045hrs, Andrew Awany the RDC Alebtong while proceeding to the District Headquarters, found supporters of    Hon. Amama Mbabazi having blocked the road at Corner Aloi and movement of traffic was paralyzed.  He got out of his car and called one of the policemen to clear the road.  He claims that at that point the so-called security guards (not police) assaulted him.  The RDC registered a case of assault, malicious damage to his official motor vehicle and theft of his IPad and IPhone. The acting RPC SSP Ematu and SP Charles Erechu the head Electoral and Political desk, North Kyoga, proceeded are investigating the case. After the incident, Hon Amama Mbabazi left the district without any other incident.

Amuru Incident: On 23rd December 2015 candidate Dr Kizza Besigye held campaign rallies in Amuru District. He finished the rally at Olwal by 6pm, however, he insisted on continuing with his campaign rallies at Olwel at 6.30 pm, Parabongo at 7pm, then Pabbo at 7.40pm, and all this time he was being cautioned by the police in vain. He arrived at Atyak at 8.30pm which was way beyond the campaign time. It is at that point that a defiant crowd was dispersed by police, but no one was injured.

Dokolo Incident: On 29thDec 2015, Hon. Amama Mbabazi left Amolatar after 6pm and proceeded to Dokolo District for a political rally (past the designated campaign time).  He did not stop at Kangai where he was scheduled to hold a rally because it was already late. He reached Dokolo at 7.20 pm, and stopped to interact with people which, according to the appreciation of the DPC amounted to campaigning. The DPC cautioned him about it, but Hon. Amama Mbabazi insisted and continued campaigning. The DPC made the first pronouncement of dispersing the crowd at 7.25pm, and again at 7.30pm.  Thereafter, he dispersed the crowd with the use of tear gas.  But nobody was injured. Hon. Amama Mbabazi left for Lira district without any other incident.

Clashes over denying candidates access to hospitals and other public places Arua District: On 29th Dec 2015, FDC Presidential Candidate Dr. Kiiza Besigye toured several sub-counties that included Pawol and Rhino camp.  During his tour of Rhino camp, he had plans of visiting Rhino camp Health centre IV with a crowd of supporters claiming that he was sick and wanted to be treated from the hospital.  The police advised him to enter with one or two of his supporters which he refused to adhere to. He tried to force his entry, but was prevented. Thereafter, he proceeded to Rigbo Trading centre where he held a rally. After about 30mins a team of journalists from NTV in a motor vehicle returned to Rhino Camp Health Centre IV with 2 people claiming they were accident victims.  They insisted on entering the health centre with their cameras and motor vehicle and were prevented by the DPC. The occupants were Azabo Mohammad, Victor Wadri and Aboo Emmanuel who were travelling in a motor vehicle Reg No: UAX 381L had been involved in a car accident.  It overturned while on their way to Rigbo trading centre. They escaped with minor injuries.  Eventually, they were handed over to the Police. They were taken to the health centre and given treatment.

Barlonyo incident: On 30th Dec 2015 1000hrs, the acting RPC Lira SSP Ematu was informed by the Police escort of Hon. Amama Mbabazi of the schedule of activities. They included among others that the team was proceeding to Aloi and Apala in Alebtong District where he was not supposed to be according to the campaign schedule. The team would later on proceed to Bar-lonyo memorial site, where the management through their Chairperson Mr Ogwang Morris denied him entry.

Clashes over venues for candidates

Masindi District: On 27th Dec 2015, Hon. Amama Mbabazi, the Go Forward Presidential candidate was blocked from accessing the venue by Masindi Municipal authorities for non- payment of the charges to use the Municipal Council premises. However, his coordinators were advised to use the Boma ground in Masindi town and they complied. The Hon. Amama Mbabazi supporters waited for their candidate who arrived at 2000hrs at night from Buliisa District and the rally did not take place.

Buliisa District: On 27th Dec 2015, at Biiso Trading Centre supporters of            Hon. Amama Mbabazi blocked him along Biiso-Buliisa road, while he was heading to Buliisa Trading centre for his next rally. This was done by a bodaboda group who claimed they had not been paid by Kirungi Paddy, the aspiring MP of the area.  Police dispersed the group and facilitate Hon. Amama Mbabazi and his group to proceed.

Clearly, therefore, allegations against the Police, and by extension the State, that some candidates, in particular, Hon Mbabazi and Dr Kizza Besigye are being unlawfully blocked from carrying on with their campaigns, or lawfully accessing certain premises/campaign venues are totally false.  We appeal to candidates/political leaders to act with responsibility, and abide by the campaign guidelines by the Electoral Commission, and the law in general.  The Uganda Police is committed to ensuring that all candidates go about their campaign schedules freely and peacefully.  What we ask is that law and law enforcement is respected.  We, also, caution those who think they can act with impunity, and take law into their hands that they will be dealt within the law.  Uganda is governed by a Constitution and a body of laws.  If you are aggrieved seek legal redress.

I wish you all a Happy and Prosperous New Year. 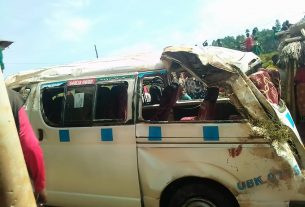 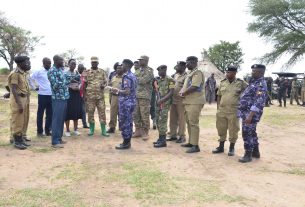 THE DIGP CONDUCTS A CRITICAL REVIEW OF ASTU DEPLOYMENTS IN KARAMOJA 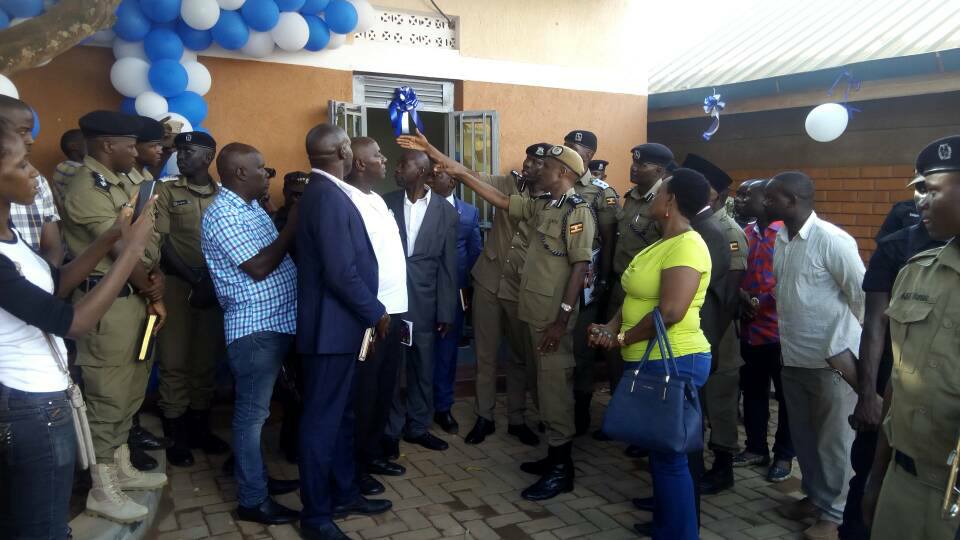