Yesterday, Monday, 7th December 2015, two reports were released by two organizations, namely, Amnesty International, and Transparency International.  We did not have the benefit of accessing and reading the reports before they were published.  Therefore, at this point we shall, only, make general comment as we prepare detailed responses to the allegations made against the Uganda Police.

Indeed, we are surprised, and extremely disappointed that in spite of the fact that we were very cooperative to representatives of the Amnesty International, and, together spending days, and hours, (including I, personally), painstakingly going through the allegations made against the Police and giving information, context, and explanations in respect of incidents and situations mentioned in the report, Amnesty International gives prominence, and credibility to those accusing the Police, and, no justice to the elaborate information on what happened, background to what happened, as well as explaining police actions in each case, including the management of criminal cases, and handling of suspects that we made available to them.  Instead, where they mention the Police, it is only to note but completely dismiss what we told them.  The mandate of the Police of keeping law and order, as well as the obligations of organizers of public events under the Public Order Management Act and other laws are hardly mentioned and taken into account in their report.  Moreover, while the report focuses on isolated incidents of clashes of the Police with political activists, it does not bother (in spite of our explanations) to, objectively, mention the causes, the genesis, i.e. the chain of causation of those clashes,  since their preoccupation is to give a negative image that Police is targeting certain political groups.  It does not mention the fact that many public rallies were held peacefully during the primaries of the respective parties, in particular the FDC, where Dr Kizza Besigye and                   Maj Gen Mugisha Muntu traversed the country campaigning with the support of the Uganda Police.  It does not mention that nominations of Presidential, and Parliamentary, and Local council candidates accompanied by mass processions and rallies took place peacefully secured by the Uganda Police.  It does not mention that campaigns by all Presidential and other candidates are going on peacefully throughout the country secured by the Uganda Police.  In fact, as I watched, and listened, last night, to Ms Sarah Johnson of Amnesty International on an NTV programme, I could not help wonder whether it is the same person that we have been meeting, cordially, and corresponding with regularly.

For the benefit of the public, we intend to give detailed responses to each and every allegation, and conclusions of Amnesty International, point by point, as we gave to Ms Sarah Johnson and her delegation, when we met them.

Finally, we wish to assure the public that the fight against corruption, indiscipline, and other professional misconduct in the Force has been on for some decades and is yielding results.  Specifically, the Professional Standards Unit, and the Directorate of Legal Services and Human Rights are tasked with detecting, and punishing service offences.  Beginning this year, we shall make public annual reports on the fight against corruption, and other misconduct in the Uganda Police, and actions taken against concerned officers.  We do not suggest that there are no more incidents of corruption in the Police, and nobody can make that claim with respect to any institution, organization or country anywhere in the world, (including those who posture to be “holier than thou” and are always quick to passing judgment on others). But, there is no doubt that we are winning the fight, especially with increased vigilance within the force, as well as popular vigilance from the public, particularly crime preventers.

We, therefore, call upon the public not to be quick to judge the Police on the basis of the two reports.  As Amnesty International invokes international standards, they forget the Principle of Natural Justice which requires that before one is judged one should be given a fair hearing.  While Amnesty International duped us that they were giving us that hearing, Transparency  International did not even attempt or pretend to do before they published their report.

I appeal to the officers, men, and women of the Uganda Police not to be discouraged by the two reports because, precisely that is the objective of their authors: to discourage you, to disorganize you, and disorient you.  Instead, be conscious of whatever you do, and be more vigilant,  knowing that, in our daily operations of keeping our country safe and secure, there are vicious forces (abroad, and at home) who are not happy with what the country has achieved, and are fighting, and hoping that we fail.  They are using whatever weapons, including misusing the power of the camera and the pen to target, focus and fault us.  Deny them the opportunity by being even more smart and professional especially in handling provocative attacks during public disorders and riots. 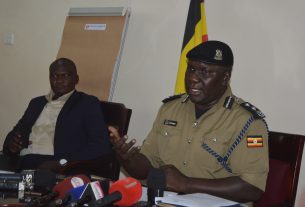