The Joint Security Task Team actively investigating the murderous rampage by an organised gang of criminal assailants has so far arrested 15 suspects highly connected to the staggering and vicious murders in the two districts of Lwengo and Masaka.

In Masaka district, 6 suspects have been arrested in connection with the murders by hacking and beating of 9 victims to death.  These include;  Kawalya Yazid, Sserwada Mike, Muwonge Jude, Nakakawa Slyvia, Kibedi Yowana, Batesita and Jjemba Francis.

The deceased persons include; Mukasa Idrisa, a 90 year old, male adult of Kikungwe “A” village, Butale, who was attacked on the 22.08.2021 and hit on the forehead with a blunt object and killed on the spot.   On the 23.08.2021, a one Mugerwa Francis aka Kiiza Nswa, a 58 year old, male adult of Setala village, Senya ward, Kabonera Division in Masaka city was attached by Sserwada Mike and others while on his way home.  He was hit on the head several times, killed and the body dumped along the footpath to his home.

Again on the 23.08.2021, at around 9:15pm, a one Kakooza Sulaiman, a 54 year old, male adult and resident of Senya village, Senya ward, Kabonera division, in Masaka was attacked by Sserwada Mike and others while on his way home.  He was hit with a blunt object several times and killed.  His body was dumped alongside the foot path to his home.

Then on the 25.08.2021, at around 8:20pm, a one Nampijja Muhangaza, a 75 year old, female adult of Kasaali village, Bisanje Kabonera division in Masaka, was attacked while preparing her supper.  She was hit on the head and killed.  Her body was abandoned in the kitchen.

On the 25.08.2021, a one Yeye Peter, a 30 year old, casual worker and male adult of Bisanje village, Kimanya, Kabobera Division in Masaka, was attacked and hit on the head with a blunt object, killing him instantly. His body was abandoned in a nearby plantation.  The following day on the 26.08.2021, a one Mulindwa Maddi, a 45 year old male adult was attacked at around 9:30pm, while checking on his home at Kisaka village, Kiteredde ward, Kabonera division, in Masaka.  He was alone when he was cut on the head and killed.

On the 29.08.2021, at around 3am, a one Nakato Maria an 80 year old, female adult, who was staying alone at Kitenga “A” LCI, Kalagala Parish, Nyendo, Mukungwe division, was attacked in her house, killed with a blunt object.  Her body was dragged and dumped in the banana plantation.

On the 21.07.2021, two victims namely, Kabanda John and Kalya Vicent, were attacked while riding home at around 10:30pm along Kamanya Miigo road, Taaga village, Nkoni, Lwengo district.  They were hit with blunt objects and killed, and the bodies dragged to a nearby coffee plantation.  Three suspects identified as Kibirango John Bosco alias Boy and Ssegawa Muzafaru and Ssewankambo Mohammad alias TALU were identified, and two arrested so far (Kibirango and Ssewankambo).

On the 31.07.2021, a one Nkanka Joseph a 51 year old, male adult and Kaweesi Godfrey, a 30 year old, male adult of Nakalete village, Kisekka, Lwengo District, were attacked at around 8pm, by the assailants, hacked and left unconscious.  They were rushed to Masaka Referral Hospital where they later died.  On the 2.08.2021, a one Bwanika Joseph, a male adult and dump victim, was attacked at Kisekka “B”, village, Kankamba, in Lwengo district and killed.

Additionally, on the 4.08.2021, a one Ddumba Joseph Lutakome, a 59 year old, male adult of Katoma village, Lwengo Rural, in Lwengo district was attacked, hit with blunt objects and killed.  The body was dumped in a coffee plantation.  And on the 12.08.2021 at 11am, a one Lubega Aramanthan, was discovered dead, at Malonge village, Katovu, Lwengo, with multiple cuts to the head.

Again on the 15.08.2021 at around 2:10am a one Kayemba Sowedi, a 29 year old, businessman, was waylaid and hacked to death at Mpumudde village, Byakabirizi- Kyazanga in Lwengo district.  His body was abandoned along the roadside.  The following day, on the 16.08.2021, a one Ibrahim Ssebwana, a 50 year old, male adult was attacked by assailants at Byajiri village, Kito Parish, Lwengo Rural in Lwengo district and hacked to death.  The assailants proceeded on a murder spree and hacked to death, a one Galiwango Paul, a 60 year old male adult of Byanjiri village, and a third victim only known as MONDAY, a 30 year old, male adult, of Nasiti village, Ndagwe.  The two victims were rushed to Masaka Referral Hospital where they later died.  Five suspects who include; Kabayo Henry, Kaganda Moses, Ssembuya Issa, Mutabaazi Batesita and Kayebura were arrested for further interrogation.

On the 22.08.2021, a one Mbaziira Richard, a 60 year old, Deputy Catechist at Kkingo parish was attacked and hacked to death at Kyambogo village, Nkoni Parish, Lwengo district.  The canine dogs tracked the scent to the highway and lost it.  Then on the 27.08.2021, a one Nantale Joyce, a 70 year old, female adult was attached at Bwasa village, Kasana Parish, Kkingo Sub-county, Lwengo district and hacked together with her 6 year old granddaughter Birungi Barbra.  The two victims were rushed to Masaka Regional Hospital where they later died.  Again on the 27.08.2021 at around 11:30pm at Nabyewanga village, Nkoni in Lwengo district, the assailants attacked the home of Bukenya Fred with his family of 10 and set it on fire.  There were no casualties however, the whole house was burnt to the ground and a motorcycle registration number UDB391H Suzuki CC90.

And then on the 28.08.2021, a one Kirembwe Henry, an 81 year old, male was attacked and hit on the head using blunt objects that killed him instantly.  The assailants picked his phone with simcard number 0783-084919 and rang the daughter based in Sweden.  She called Ssepuya Stephen who confirmed the death of his father.  On the 29.08.2021, at around 9pm,a one Lusiina Vincent, a 70 year old, male adult, of Mpumudde district, Lyakibiizi Parish, Lwengo district was attacked while staying alone.  He was hit on the head and killed instantly.

The vicious murders started on the 21.07.2021, at Kamenyamigo road, Taaga village, Nkoni, Lwengo district, with the double murder by hacking of Kabanda John and Kalya Vicent who were riding their bicycles home at around 10:30pm. The criminal assailants established two domestic cells in Lwengo and Masaka , that were operating independently.  Both cells were targeting elderly persons staying alone and other vulnerable people found moving home during night time.  For their own unique motives, they would attack and kill the victims without stealing from them.

The task team has significantly arrested 15 suspects and recovered several exhibits.  They continue to work with the local leaders and the community, to track down the assailants in the new domestic cell in Bukoto West, who also form part of the organised gang behind the spree of brutal murders.  Most of the suspects are residents embedded within the community in Lwengo and Masaka.  They all admitted to participating in the multiple slaying of their targeted victims.

After getting significant clues on the characteristics of the assailants, anonymous threatening letters, their mode of transport, a description of their get away, and the mastermind behind the vicious murders, we shall ensure all the remaining suspects are arrested and face justice for the senseless carnage they have caused.

Meanwhile, our hearts go out to the victims, especially the families of the 26 deceased persons, hacked and beaten to death.  We urge all residents to exhibit more vigilance in their daily activities, and to create protective covers around all elderly persons, in close coordination with Law enforcement personnel.

POLICING OF THE BY-ELECTIONS IN OMORO COUNTY, OMORO DISTRICT 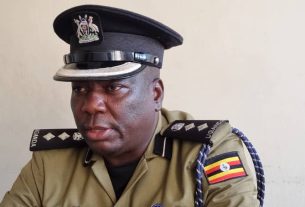 Statement on Arrest of City Journalist